One For The Books: Reimagining the Missouri City Branch Library

Originally founded in Missouri City, a suburb southwest of Houston in 1992, the 18,458-square-foot MISSOURI CITY BRANCH LIBRARY was due for expansion to keep up with the growing community it served. It was also overdue for some high-tech updates to keep up with the digital age. Local voters approved funding for the expansion and renovation of the library in a 2015 bond election, with plans that included a three-story, 11,009-square-foot addition, with a soaring balcony, study rooms, a computer lab, self-service checkout machines and more.

MERRIMAN HOLT POWELL ARCHITECTS (MHPA) was chosen to design and manage the update. “Our office did the original building in 1991, and we were asked back by the county to do the expansion,” said Michelle Carter, principal with Merriman Holt Powell. MHPA’s design brings the nearly 20-year-old library into the 21st century, with a sharp, triangular three-story addition boldly pointing due east.

“The site defined the shape of the addition,” explained Carter. Phase II of the library was meant to create an iconic new library image. “The county wanted the addition to be a beacon for the public, so they could see the library and the overall county complex.”

With approved designs in hand, now it was a matter of selecting materials and a contractor. Merriman Holt Powell Architects had a history of working with WADE ARCHITECTURAL SYSTEMS, a CENTRIA dealer, and began considering metal exterior products for its striking, angular library addition. “We really like the products provided by CENTRIA,” said Carter, “They always enhance our architecture.”

On the Same Page

“Merriman Holt Powell approached me about the idea of doing a modular metal panel like CENTRIA'S INTERCEPT,” said Wade project manager Brian Selig. From that point on, Selig worked hand-in-hand with MHPA, identifying the right products, developing precise specifications and choosing the ideal subcontractor. UNDERWOOD SHEET METAL was chosen due to their prior experience with both Wade and MHPA, as well as extensive experience with CENTRIA products – including a high-profile installation on the SARAH CAMPBELL BLAFFER FOUNDATION CENTER FOR CONSERVATION at the Museum of Fine Arts in Houston.

The design team selected CENTRIA’s INTERCEPT ENTYRE panels due to their smooth, unbroken appearance – adding to the sleek, isometric style of the exterior design. But that’s not all. “There are a lot of good reasons for a public entity to choose products like Intercept,” said Selig. INTERCEPT ENTYRE is large and flexible, capable of creating angular shapes like the triangular addition required by MHPA’s design. The large module sizes provide sleek, unmatched edge-to-edge widths. Selig also explained that with no plastic cores, the panel is environmentally friendly and safely recyclable at the end of its life cycle.

For the perforated, vertical spans holding the library’s signage, the MR3-36 ECOSCREEN product was chosen. This perforated screen wall helps control light, offer shade and provide a counterpoint to the horizontal, angular aesthetics of the building. EcoScreen is a unique fabrication that provides a 10-40% open area, controlling light and air movement and creating the effect of a translucent screen. According to Underwood’s Bridges, it was simple to install: “That was a day's worth of work,” he said, “That was really easy.”

The rest of the project was nearly as fast. “Once we were on the job,” said Bridges, “We were there maybe two weeks.” The new Missouri City Library hosted a GRAND REOPENING on June 1, 2020, and everyone involved is pleased with the library’s striking new appearance.

Wade features the library on one of their PROJECT PAGES, while MHPA highlights their favorite aspects of the project HERE.

To learn more about CENTRIA and the products used on PHASE II OF THE MISSOURI CITY BRANCH LIBRARY, visit the CENTRIA SITE or CONTACT A REPRESENTATIVE today. 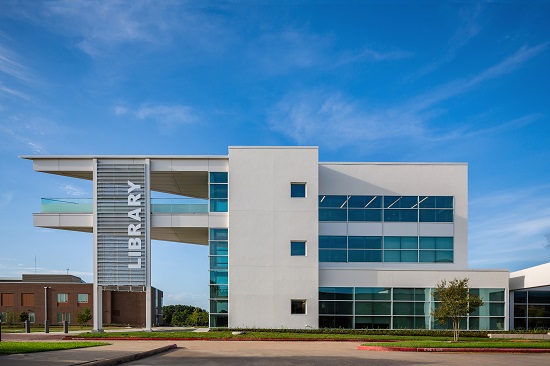