At their best, religious institutions both enrapture and enwrap their community. To this end, zinc panels are used extensively in the building envelope of Temple Sinai, Oakland, CA—a Silver LEED project and recipient of the 2012 MCA Chairman’s Award Institutional category—to entirely envelop the new building, including its full exterior and low-sloped roof as well as some interior spaces.

The aim was to bring together the temple’s varied programs—a sanctuary, shared outdoor space, preschool, religious school, administrative office, and library—and, in turn, to unify the community and its place of worship through design.

The zinc panels also play a central role in an architectural design steeped in symbolism. The zinc sheets represent a Jewish prayer shawl that wraps worshippers and the temple’s three “jewels”—its sanctuary, library, and a shared gathering space. The light streams in through gaps or “folds” in the exterior wrap, connecting the temple to its surrounding community. In addition, the green-tinted panels work perfectly with a stone-clad wall that runs throughout the entire building, signifying the Western Wall in Jerusalem in both material and length. The interplay of these two natural materials, stone and zinc, symbolically links past to present and ancient to modern.

According to the architectural firm, Michael Harris Architecture, San Francisco, CA, and the metal manufacturer, Umicore Building Products, Raleigh, NC, zinc was chosen for the new facility for multiple reasons. The facility’s design originally called for copper (to represent King Solomon’s copper mines), but Umicore’s green-tinted VMZ standing-seam panel was selected for the project, because “it has a fluid color throughout and provides a green tint right off the bat,” according to Bryan Ninneman, a territory manager at Umicore.

Zinc also possesses sustainable qualities that were attractive. Architect Michael Harris also noted the long service life of zinc, which has a service life of 80–100 years for a roofing application in normal weather conditions. “We figured that the material would last forever,” he said, adding that its texture and color “has depth and richness to it” and “has a patina that was going to change very little over time, which is nice.”

Other than encouraging a sense of community, building owner First Hebrew Congregation of Oakland was concerned with reducing the building’s environmental impact. “Temple Sinai is very much a part of the larger community around it,” according to the temple’s website at www.oaklandsinai.org. “This sense of community supports [the] Jewish concept of tikkum olam, or ‘repairing the world,’ and to this end, LEED certification was an important goal. The use of VMZ roof and wall cladding contributes to the LEED certification, because architectural zinc is a thoroughly sustainable building material.”

Harris further noted another benefit of zinc—its flexibility. “It bends and curves,” he said, “and it’s put on in sheets so we get horizontal ribs, both on the ceiling and the walls, which we could track around [the entire building].”

The beauty of the panels also helped spotlight important focal points of the design, Harris added. “The idea was to select a couple of public spaces on the inside and put zinc around them to signify that these are special spaces.”

Whether a high-end building material such as zinc will become a growing trend among the institutional buildings such as Temple Sinai is a topic of speculation. Umicore Building Products’s Ninneman noted that requests for zinc wall panel among his customers has steadily risen during the past decade, but he suspects that the trend will continue only if the U.S. economy continues to expand. 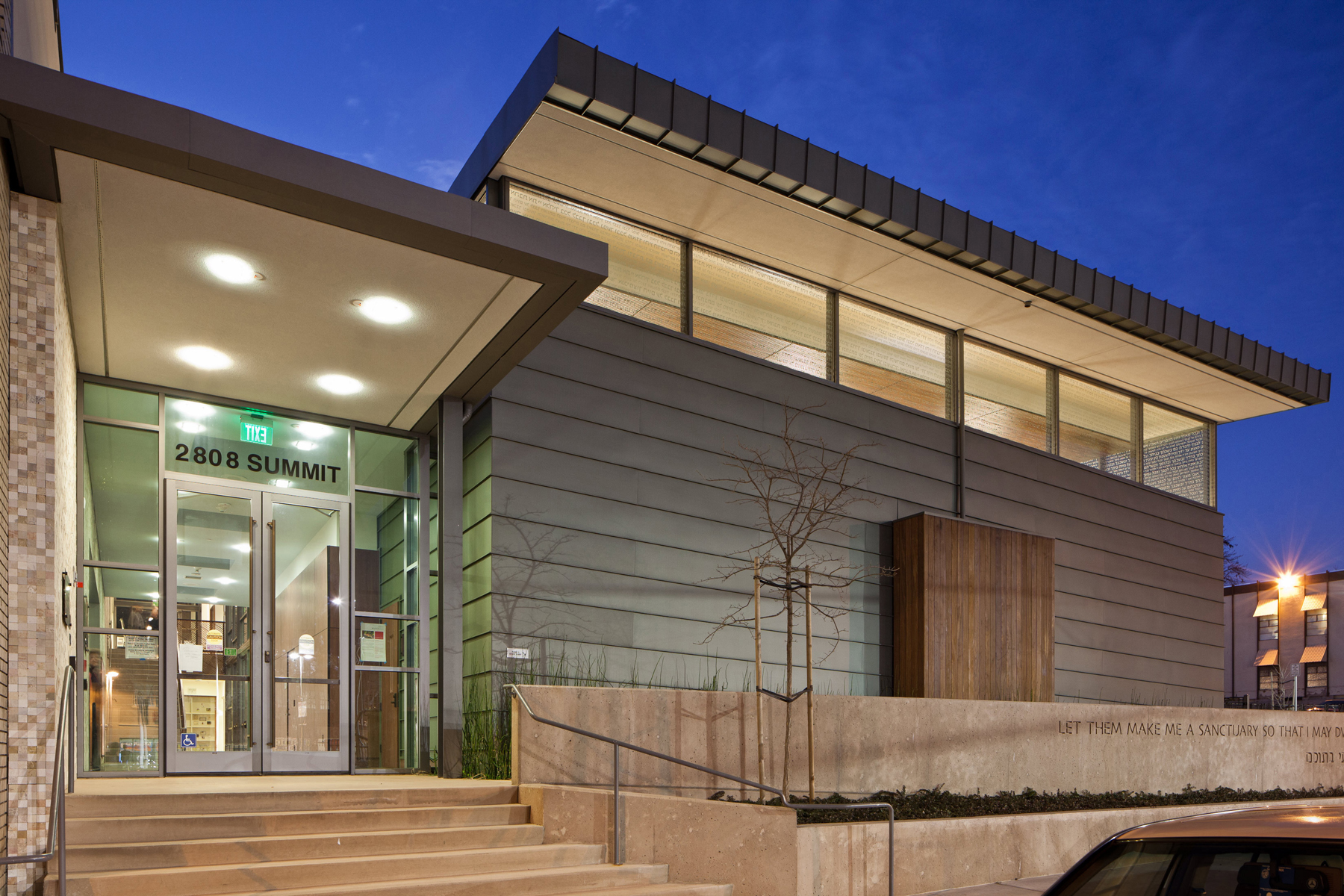