A Unique Design That Serves a Purpose

Chicago, IL, is renowned for its skyscraper architecture, and the city’s new Tower Hospital at Rush University Medical Center stands tall among the best. More than just a pretty building, it was designed by and for its occupants—the doctors, nurses, staff, and patients who use it.

The unique butterfly-shaped design is awe-inspiring to outsiders, but the design serves an important purpose as well. The floor plan, essentially a triangle, brings the patient rooms closer together, a specific concern for the nurses seeking more efficient access to patients.

The architects collaborated with Rush staff to find out how they worked and designed the shape of the building to fit their operational model. “We let that impact what the design needed to be,” Moorhead said. “The nurses talked about the number of miles they walk per shift. They were particularly interested in creating a plan that pushed together the patient rooms.”

Once the butterfly shape was conceptualized, the challenge became how to make it fly…functionally, aesthetically, and monetarily. Alucobond® Aluminum Composite Material (ACM) from 3A Composites USA, Inc. provided the solution. About 250,000 sq. ft. of ALUCOBOND® PLUS in custom Spinnaker Bone White color was installed as exterior wall cladding on the Tower hospital.

“Metal provided flexibility and affordability,” Moorhead said. “It was the perfect choice to give the crisp white look that Rush was interested in, and it was easily adaptable to the curvilinear shape of the building.”

At one point in the planning, the idea of the butterfly shape was nearly scrapped for a more standard rectangular shape to stay within budget, but the Rush team was determined to achieve their vision.

“The dramatic curvilinear shape was driven by the clinical team and our ‘inside out’ approach,” Moorhead said. “The doctors and nurses really liked the operational flow of this plan. The question then became: how do we clad it within the budget allowance?”

The aluminum composite material used to clad the tower helped Rush realize those goals. “ALUCOBOND®  is durable, doesn’t warp, and can be bent into any shape,” said Ben Branham, architectural marketing manager at 3A Composites USA, Inc. “The Rush Tower has a lot of bends and curves. ALUCOBOND®  provided the vehicle for architects to do that.”

Sobotec in Hamilton, ON, the metal fabricator on the project, designed a unitized curtain wall system to enclose the Tower as quickly as possible. Sobotec created AutoCAD computer-generated drawings to fabricate ALUCOBOND®  panels. ASI Ltd., in charge of the installation, then fit the panels into the prefabricated curtain wall with a framed support system for the metal panels and glass.

The 840,000-sq-ft, LEED-Gold certified Tower Hospital is the main bed tower on the Rush University Medical Center campus. It is located on a corner site along the Eisenhower expressway, so it is highly visible to commuters in and out of the city. Like many academic medical centers, the Rush campus is a conglomeration of buildings constructed during different decades. “You can almost pick the dates of when they were constructed just by looking at them,” Moorhead said. The Tower Hospital is attached to the Atrium building, which was constructed in the 1980s.

The campus has a number of metal buildings, so an ACM-clad tower made sense in that respect as well. Choosing white as its color also was purposeful. “Whenever the color of a building is white, people assume they didn’t look at color. We looked at color extensively,” Moorhead said. “They [Rush] really wanted to project an image of fresh, clean, modern, and technically savvy. It is very crisp white, part of the image they wanted to project.” They also wanted to avoid the recent trend in hospital design, which is to make hospitals look more like hotels.

One trend the Rush team did want to pursue, however, was the move to single patient rooms. “Most hospitals have been making the shift away from shared or semiprivate rooms,” Moorhead said. The Tower Hospital, which opened its doors in January 2012, houses 304 new patient rooms in the upper “butterfly” portion of the building.

The base of building is more of a rectangular design, which houses surgery, diagnostic treatment, surgery imaging, 72 NICU units, and eight labor and delivery suites. The ground level features a new emergency room. “Planning for that was very rectilinear, the typical boxed surgery suites. It is two different worlds, the patient rooms above and the surgery suites below,” Moorhead said.

Rush University and the city of Chicago praise the new Tower Hospital. The project has won numerous awards and accolades, including Engineer News Record Midwest’s Project of the Year (2012) and the 2013 MCA Chairman’s Award in the Institutional Project category. KPMG named the Rush Tower, “one of the most innovative and inspiring urban architecture projects in the world.” The Chicago Tribune architectural critic Blair Kamin called it a, “towering achievement, the new Rush hospital could be Chicago’s next great building.”

Tower Hospital’s architectural and operational goals were achieved largely because of metal. “While our foremost goal was for the new hospital’s design to support its function and enhance patient care, we also knew it would be very important to establish a strong visual presence in Chicago’s skyline and along the expressway leading to and from the city,” said Mike Lamont, associate vice president, Capital Projects, Rush University Medical Center.

MATERIALS
ALUCOBOND® PLUS
® ALUCOBOND is a registered trademark of 3A Composites USA, Inc 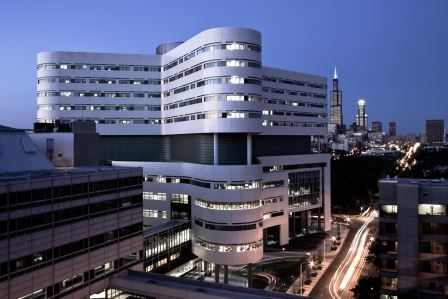 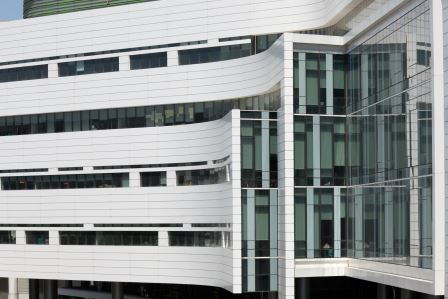