Pennsylvania has long been associated with the manufacturing industry. Settlements were centered around mills and the products they produced. As times have changed, many mills that manufactured steel, paper, and other products have gone by the wayside, leaving empty buildings and a void in local economies. Downingtown, PA, located about 33 miles from Philadelphia, was once a hub for mills, with many of the buildings dating back to the 19th century. A corridor along Brandywine Creek featured a variety of mills that helped anchor downtown Downingtown. In fact, until the American Revolution, Downingtown was known as “Milltown.”

As industries have changed, the manufacturing district near Brandywine Creek became increasingly riddled with vacant mills. Local leaders struggled with how to revitalize the area while maintaining Downingtown’s historic ties to mills and manufacturing. One of the first projects undertaken to reinvigorate downtown Downingtown was
to convert an old mill building into a contemporary restaurant: the Firecreek Restaurant & Bar. Firecreek sits on the banks of Brandywine Creek and has provided a blueprint for how to maintain the town’s historical ties while giving the area some contemporary flare. The people of Downingtown are returning to the Brandywine Creek district but not to clock in long hours at the mills.

“A lot of people consider this project, due to its proximity to downtown, to be the catalyst for the revitalization of downtown Downingtown,” said Tom Deignan, president of Carroll Contractors, the general contractor for the project. Carroll architects also designed the project.

Deignan was determined to modernize the structure while also using as many original elements of the mill building as possible. The metal roof of the restaurant, 3,700 sq ft of 24-gauge galvalume snap-on panels, was the key to tying the contemporary and historic elements together, Deignan said. The original mill building was

constructed in the early 1800s and also sported a metal roof. Deignan knew from the beginning that he

wanted to incorporate a new metal roof into the building’s redesign. The result was a structure that harkened back to the mill’s roots with the sparkling galvalume roof providing a cosmetic boost. The silver roof compliments the building’s original fieldstone walls, and its large windows allow for bright, natural lighting during the day and an open but intimate feel at night.

Firecreek Restaurant occupies a 6,200-sq-ft stone building that formerly housed a sawmill and then the Brandywine Paper Mill. The mill was dilapidated and abandoned when Deignan and his business partners purchased the property in 2004, but Deignan knew that the galvalume roof would be the key feature that would bridge the building’s past to its future.

Deignan was right. The galvalume roof provided the bridge he was looking for and more, earning the 2010 Presidents Award for Metal Roofing by the Metal Construction Association. He said in addition to its historic architectural features, the galvalume roof is durable, requires little maintenance, and was easy to install.

“That’s one of the beauties of it,” Deignan said. “Because it’s prefabricated and cut to specification, installation is very efficient.”

Firecreek opened in spring 2009. Deignan said the feedback from Downington residents has been “unequivocally” positive. In fact, one senior resident broke down in tears when he saw the refurbished structure, remembering the run-down mill that once occupied the space. Patrons can enjoy the scenic views of Brandywine Creek from Firecreek’s outdoor terrace, or they can sit inside by the fireplace and feel the warmth of the historic ambiance while also catching a glimpse of the lavish outdoor scenery, thanks to the glass windows that make up Firecreek’s west wall facing the creek. The vaulted ceilings are accented by the mill’s original steel roof trusses. High-definition televisions and pendant lights at the bar contrast with artifacts recovered from the building’s previous uses, such as the large gears and wheels that were once used for printing.

“We get compliments every single day about the architecture and the warmth of the building,” Deignan said.

Deignan found more use for metal on the exterior of a small addition on the south side of the building that houses Firecreek’s kitchen. The exterior wall of the kitchen facing the parking lot consists of 16-ounce, halfinch copper corrugated panels. Deignan said the rust-colored panels broke up the redundancy of the fieldstone walls and further transformed the building from mill to eclectic restaurant.

In addition to renovating the mill space for Firecreek, Carroll Contractors tore down several other outbuildings that surrounded the mill and reused those stones to erect a three-story condominium on the east side of the restaurant. The condominium building also has a 24-gauge galvalume snap-on panel roof, but that roof is shaded red, rather than the natural metallic look sported by the restaurant’s roof.

Deignan said two additional phases of the project are planned to convert nearby mill buildings into office buildings and condominiums, but the economy will dictate when those phases move forward. He believes the development will qualify for even more awards once all phases are completed. But for now there’s no question in Deignan’s mind that Firecreek will be the catalyst for a plethora of new developments in downtown Downingtown that will involve refurbishing historic structures to create a new vibrant entertainment, commercial, and retail hub.

The company motto at Carroll Contractors is “preserving the past and building the future.” Deignan and his team accomplished that mission when they designed and built the Firecreek Restaurant and made the dynamic galvalume roof the centerpiece of the restaurant’s design.

BUILDING OWNER
SHDC Papermill Associates (one of Deignan’s other companies) 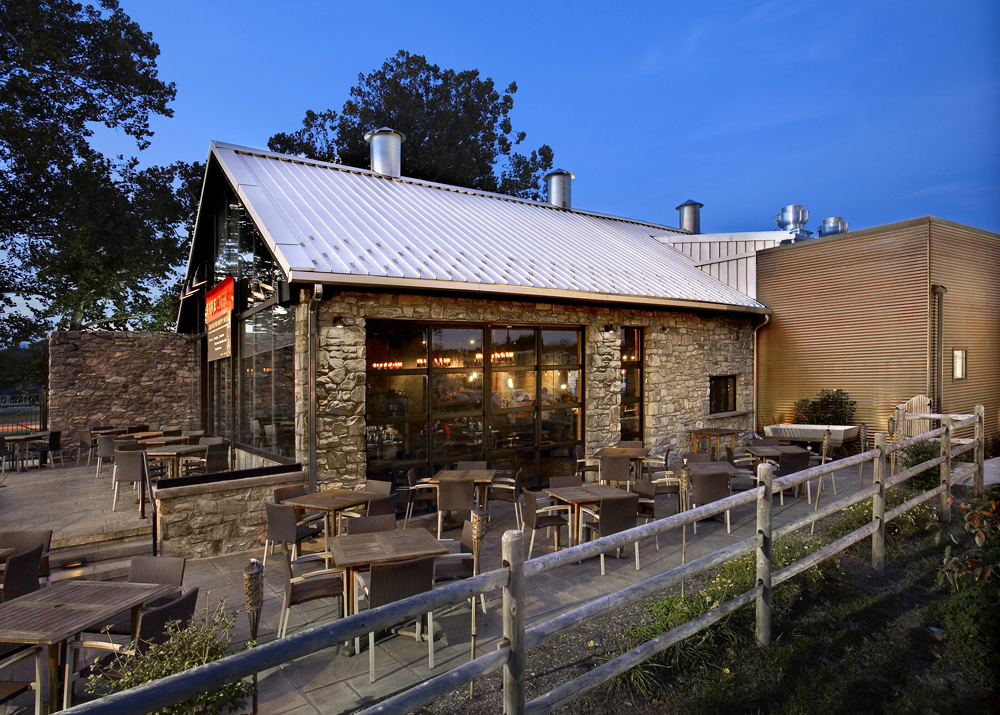